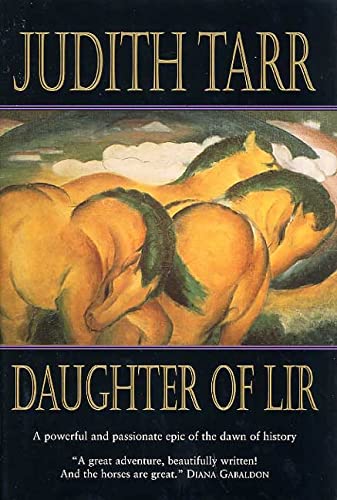 Tarr, a historian turned historical fantasist, follows with another richly imagined tale of priestess/warrior culture clash. The Bronze Age city of Lir, founded by the matriarchal horse-goddess worshippers of the prequel, faces an impending war against invaders armed with the most fearsome device ever: the chariot. The story begins when ill omens persuade Lir's Priestess Mother to reject her long-awaited baby daughter, who is then raised in obscurity by a potter and his wife. Rhian grows up intelligent and willful, the wind whispering visions to her, her dreams filled with images of a powerfully destructive war machine. Riding off from her village astride the living goddess White Mare after she is passed over by a priestess recruiter, Rhian joins forces with Prince Emry, her brother by birth as well as in arms. They travel to the land of their enemies, where the king has fallen victim to the witchery of his young wife, Etena, despite the courageous efforts of his first wife, Aera, and his sons, Minas and Dais. Disguised as traders, Rhian and Emry master the art of building chariots and the politics of patriarchal polygamy. Knowing they will someday meet in battle, Rhian and Etena make a daring trade—Emry for Minas. Full of adventure and romance, Tarr's tale tops her usual fare (, etc.) through its ingenious evocation of early civilizations sharing knowledge, culture and family. Lir's matriarchal utopia will please feminists and romantics alike, while the war scenes will satisfy others' thirst for blood and justice.