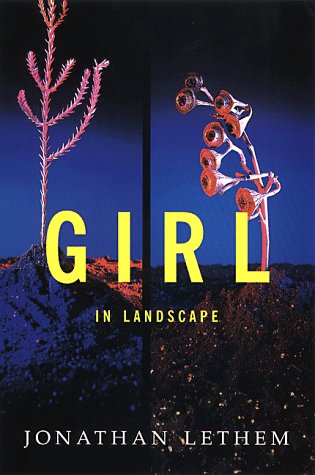 A surrealistic bildungsroman about a teenage girl unfolds among the ruins and frontier violence of a distant planet in Lethem's latest genre-bending exploration of science, landscape and the metaphysics of love and loss. As the novel opens, Pella Marsh, age 13, sets out from her subterranean home in a post-apocalyptic New York City for a final visit to Coney Island with her two younger brothers and her mother, Caitlin--all sealed in bodysuits to keep out the cancerous sun. Pella's father, Clement, has just been swept out of elective office in New York and has set his sights on the next political frontier: joining the first human settlers on the Planet of the Archbuilders. When Caitlin suddenly succumbs to a brain tumor, Clement whisks the grieving children by space ship to the faraway planet. Once the domain of a super-evolved alien species who used ""viruses"" to alter their ecosystem before abandoning it, the planet is now a hothouse landscape of ruined towers and refuse inhabited only by skittery, mouselike ""household deer"" and a few remaining Archbuilders--gentle, druidic creatures with furry, tendrilled, exoskeletal bodies and names like ""Gelatinous Stand."" Clement's mission, to forge a community that embraces the Archbuilders, puts him on a collision course with Ephram Nugent, a xenophobic homesteader who so closely resembles John Ford's John Wayne that one keeps expecting him to call Clement ""Pilgrim."" Lethem (As She Climbed Across the Table, 1997, etc.) affectingly chronicles Pella's tumultuous journey through puberty and loss and the knockabout society of children thrown together by their homesteading parents. As a result, this lyrical, often far-fetched meditation on the founding myths of the 21st century remains thoroughly rooted in an emotional world much closer to home. Author tour. (Apr.)
close
Details