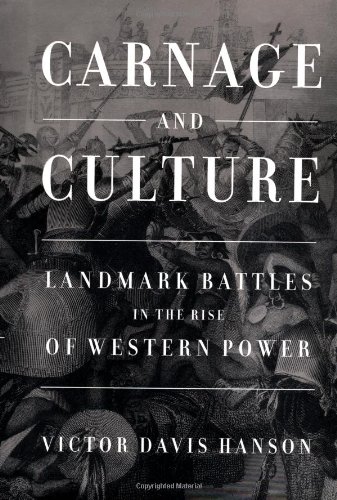 CARNAGE AND CULTURE: Landmark Battles in the Rise of Western Power

"The Western way of war is so lethal precisely because it is so amoral—shackled rarely by concerns of ritual, tradition, religion, or ethics, by anything other than military necessity." Ranging from Salamis in 480 B.C. to the Tet offensive in Vietnam, Hanson, a California State at Fresno classics professor, expands the scope of his , offering a provocative look at occidental aggression as illustrated by nine paradigmatic battles between Western and non-Western armies. Hanson sheds the overly romanticized view of battles as nationalist or ethnic honorifics and vividly portrays the deadly killing machines Western powers evolved for the destruction of non-Western opponents. Throughout, Hanson stresses the technology based lethality of Western warfare, and the role of individual initiative as opposed to the more collectivist strategies of the Persians, Carthaginians, Arabs, Turks, Aztecs, Zulus, Japanese and Vietnamese—opponents who get a chapter apiece. The single Western defeat chronicled in these pages, of the Romans in Cannae in 216 B.C., shows a victorious Hannibal unable to capitalize on his win. (The idea of the citizen/soldier, the role of civic militarism and the republican ideals of Rome seem to be the reasons why not.) A number of Hanson's conclusions will engender debate, such as his claim that America won in Vietnam, but failed to recognize it, as well as the larger claim that "free markets, free elections, and free speech" have led directly to superior forces. The book's last few chapters are fairly driven by that idea, which, along with precise, forceful writing, sets it apart from the season's secondary-sourced, battle-based military histories.