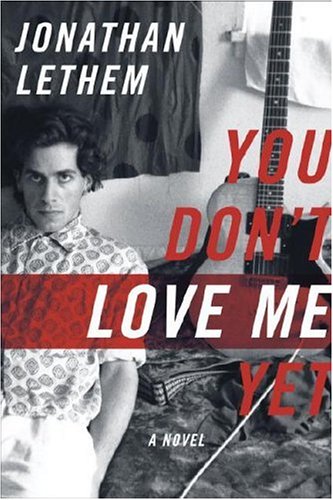 You Don't Love Me Yet

Lethem ( ; ; etc.) strays from hometown Brooklyn to recount the near-fame experience of a Los Angeles alternative rock band. Its success depends on bass guitarist Lucinda Hoekke, an unwitting femme fatale whose irrational whims torture the artsy Gen-Xers in her orbit. When the novel opens, she's answering phones for a complaint line designed to also function as a "theatrical piece" and is charmed by the eloquent gripes of one serial caller, a professional phrase writer named Carl. (He's responsible for coining "All thinking is wishful," among others.) They embark on a sex-drenched bender that culminates with the band's debut performance—a breakout success. Lucinda is the band's "secret genius," having provided the ideas for the catchiest songs; only she cribbed them from Carl, whose cooperation must be purchased with a token position in the band. Zany disaster ensues in this entertaining but largely insubstantial romantic farce. Lethem tricks out the plot with his usual social wit (music moguls are "unyouthful men in youthful clothes"), but from a writer whose previous books have carved new notches on the literary wall, this measures up as stunted growth.