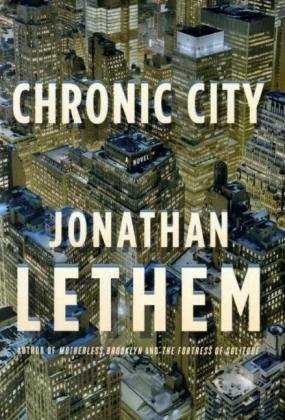 Jonathan Lethem's work has gone from postapocalyptic sci-fi to autobiographical magical realism. In , he weaves these elements together, blending a number of actual recent events to create his own surreal urban landscape. The nearly mythological construction of the Second Avenue Subway spawns a strange destructive tiger that defies capture as it transforms the old city into a scary new one. A pair of eagles illegally squatting on an Upper East Side windowsill are summarily evicted. Best of all is the economic abyss that one once encountered above 125th Street. Here, Lethem has dropped a manmade fjord, a performance art chasm.

At the heart of this city is former child star Chase Insteadman. Lately, he is better known as a celebrity fiancé to fatale femme astronaut Janice Strumbull, who is stuck in orbit because of Chinese satellite mines. Lately, though, his greater concern is his friend Perkus Tooth. Perkus is a pauper scholar, a slightly delusional Don Quixote character whose windmills are called chaldrons, imagined vases that bring inner peace. Somewhat like the tragic poet Delmore Schwartz who Saul Bellow fictionally eulogized (and Lethem acknowledges) in , Tooth cuts with equal parts genius and madness. Though he never really rises above a plasterer of “broadside” rants, he's a recognizable artifact of New York circa 1981. Between bong hits—yes, for you potheads, Chronic is his favorite brand—and downtown cultural references, conspiracy theories hiccup from Perkus's lips. A prevalent notion he has is that our reality is nothing more than a facsimile, a simulation of a hidden reality. Perkus's hyperactive brain only pauses when he lapses into his periodic “ellipse”—a kind of revelatory break. The only problem is his breaks are gradually increasing in frequency. Inasmuch as Perkus is a personification of the old New York and its highly endangered culture, Insteadman finds a moral duty to protect him.

If Perkus is Insteadman's moral conscience, Richard Abneg, an opportunistic politico, is Insteadman's naked ambition. Though Abneg started as an East Village anarchist, through intellect and arrogance he rose to become a powerful aide to Mayor Arnaheim (a Giuliani-Bloomberg hybrid). Now he's dismantling the rent stabilization laws he once championed. Eventually, these two work together to save Perkus.

Though at times requires patience, it is a luxuriously stylized paean to Gotham City's great fountain of culture that is slowly drying up. Like the city itself, the book sways toward the maximal, but its prose shines like our skyline at sunset. The key to his city lies in the very notion of reality: Chase Insteadman's moniker implies that this former actor is now just a stand-in for a greater (perhaps former) reality. By the conclusion, I found myself wondering if Lethem hadn't originally written a shorter simulacra of , when it was just an Acute City. From him I would expect no less.

The Sacrificial Circumcision of the Bronx Mesopotamia