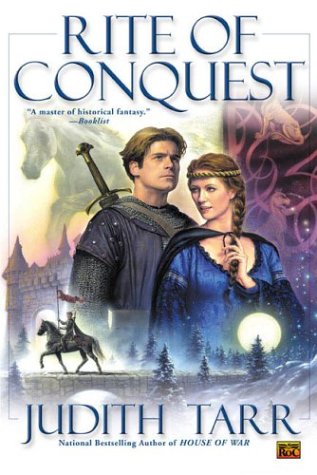 Romance reigns in Tarr's absorbing historical fantasy, in which William the Conqueror of Normandy, the reincarnation of King Arthur, must be taught to master his own magic by his witch-wife, Mathilda of Flanders. William's destiny is to throw down the "walls of iron" against the fey beings of the Otherworld, erected by the Saxons and Christianity. He fends off human enemies like Geoffrey of Anjou, while the couple's united magic allows them to travel through the Otherworld faster than mortal foes. In due course William sets sail for England, where Harold Godwineson sits on the throne, having broken his oath to support William for the succession. England's magical and material defenses are powerful, however. It takes two thunderous and marvelously depicted battles (the real-life contests of Stamford Bridge and Hastings) and the powers of William and Mathilda's witch-daughter Cecilia before William can come into his inheritance. Break-neck pacing and compelling historical detail help the reader suspend disbelief. (