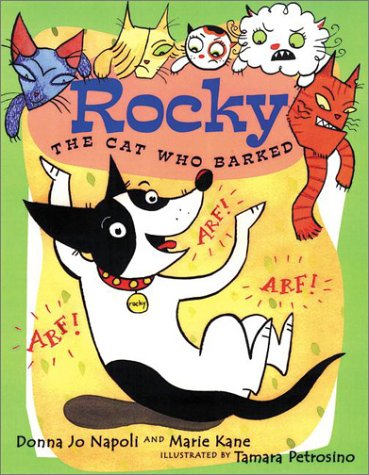 ROCKY: The Cat Who Barked

Napoli () and Kane, Napoli's sister, address the problems of aging owners and needy pets in this sympathetic story of a black-and-white dog. At first, Rocky enjoys a sedate life with an elderly woman, Old Nini. But when Nini must move to a no-dogs apartment, Rocky winds up in a new house with two "little monsters" (i.e., children) and five surly cats who are bigger than he is. The children pummel Rocky with blocks; the cats hiss at him and ruin his chew toys. "Rocky spent most of his time behind the couch, silent," curled up on "the blankie that Old Nini had knitted." By mentioning the homemade blanket, the authors shed light on Rocky's sorrow without speculating on Nini's fate. They evoke concern for his lonely situation, then show how he gains honorary feline status by barking when the children torment the cats ("the little monsters' mother came running [and] scolded them"). Petrosino () contributes cheerful watercolors, outlined in a graceful black line, that establish Rocky and the cats as distinctive and likeable personalities. The plot strongly resembles last fall's , another story of a dog appeasing a cat clique, but the attention to Rocky's lost home lends the book a particular poignancy. Ages 3-7.