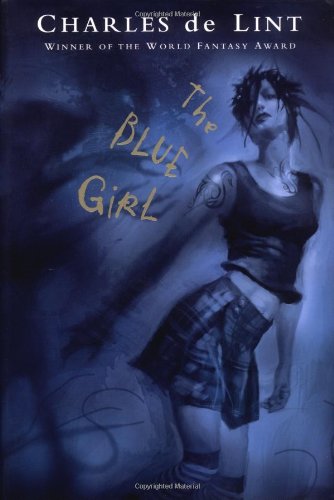 De Lint ( ) tackles magic and the afterlife in a suburban high school setting in this inventive if somewhat convoluted tale. Imogene Yeck is new to Redding High, and with her piercings and goth clothes, she immediately gets branded ("Yuck," a play on her last name). She quickly befriends an outsider of another sort, geeky and thoughtful Maxine. Imogene begins seeing a "pale, nerdy guy—sort of like a tall Harry Potter... but gawkier and with a narrower face," called Ghost, according to the school's legend. Imogene and Maxine learn that this is the ghost of Adrian, a bullied kid who "either jumped or fell off the roof" some years before. Adrian, who admires Imogene (for standing up to the bullying football quarterback), inadvertently attracts the attention of "the darkness," also called "ghost- or soul-eaters." She learns of this in part from her childhood imaginary friend Pelly, now an ominous figure who is appearing in her dreams. Fairies factor into the story, as does a roving angel who tries to convince Adrian to give up his hold on the world and "move on." The book feels a bit strained, packed with one mythology too many. It may also be challenging to some readers at first: the early clever repartée between Imogene and Maxime gives way to three different first-person narratives (Imogene's, Maxine's and Adrian's), told at two different periods in time ("Then" and "Now"). Fantasy-minded goth kids, though, will likely find it worth the effort. Ages 12-up.