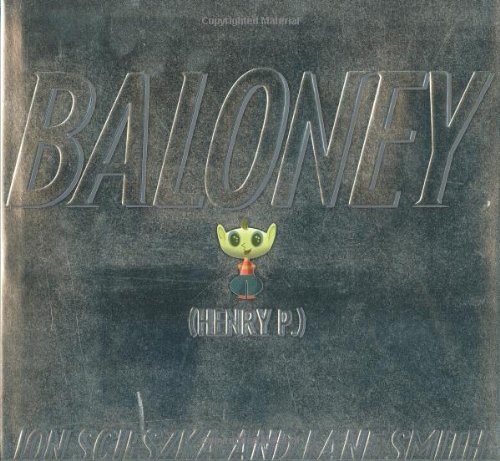 This book's gleaming silver cover and little green namesake signal intergalactic adventure. Fortunately, Scieszka and Smith () prefer innovation to UFO clichés, and this tale of an alien truant is also a language game. Lime-colored, freckled Henry P. Baloney is late for class and faces "Permanent Lifelong Detention" from Miss Bugscuffle. He concocts an excuse that spools across the pages in emphatic, italicized capital letters. " 'I would have been exactly on time,' said Henry. 'But... I misplaced my trusty zimulis. Then I... um... found it on my deski.' " Smith's airbrush-speckled collages zoom from a closeup of a pencil to Henry leaning over a kidney-shaped desk; thus, "zimulis" and "deski" enter the vocabulary. Henry goes on to describe being crowned "kuningas" of another planet and almost getting shot with a "blassa." A "Decoder" at the back of the book reveals that all 20 unfamiliar terms are either non-English (the Dutch "speelplaats" means "playground") or wordplay ("flying saucer" becomes "sighing flosser"). Contextual cues allow readers with no prior knowledge of Italian, Latvian or Polish to comprehend Henry P.'s hyperboles: "I jammed the razzo controls with my zimulis so I could land behind szkola and still be on time," says Henry, and Smith pictures a rocket console, a variety of dials and Henry's pencil. Amateur linguists will have a field day exploring this non-nonsense. All ages.