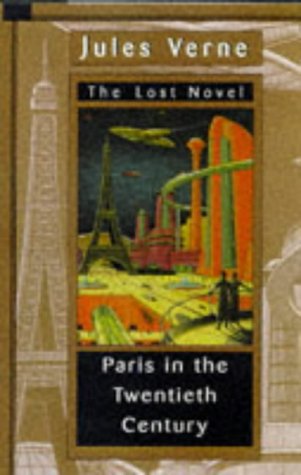 Paris in the Twentieth Century

In 1863, Jules Verne was a young writer with one published novel under his belt and a new multibook contract with a prominent French publisher in hand. The publisher, however, rejected Verne's second manuscript, opting to bring out his Journey to the Center of the Earth instead. That manuscript apparently disappeared into a drawer, not to see the light of day again until it was rediscovered and published in 1994. Now it has been rendered into English by the eminent poet and translator Richard Howard. Verne's early books tend to feature adventure plots and a positive attitude towards technology. This novel, however, shows Verne in a darker, frankly dystopian mood. His mid-20th century Paris is an enormously wealthy society, a place of technological wonders, but, like Huxley's Brave New World, it is also a society without meaningful art. Engineering and banking are the prime industries of this civilization and, as the book's protagonist discovers, not even the most talented poet can find a place for himself unless he's willing to produce odes to blast furnaces or locomotives. While the narrative contains many startling predictions--among them fax machines, electronic calculators, automobiles and elaborate subway systems--there is little here in the way of either plot or character development. It's clear, in fact, that in opting for Journey to the Center of the Earth, Verne's publisher chose the better book. Drawings not seen by PW. (Dec.)
close
Details