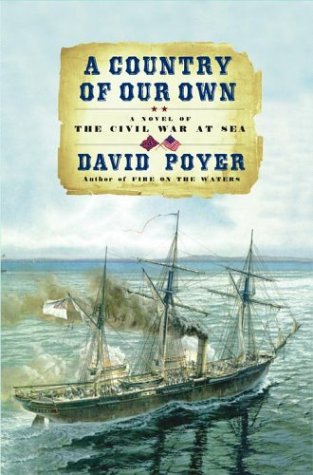 A COUNTRY OF OUR OWN

The Civil War at sea is the unusual backdrop for this second volume in a series (after ) following the career of Ker Claiborne, hero of the haplessly inadequate Confederate Navy. As one of several hundred officers who reluctantly leave U.S. service and offer their swords to the Southern cause, Claiborne initially finds himself a sailor without a ship. Following a brief but bloody land skirmish in which he demonstrates his bravado and strategic genius—as well as his loyalty to the South, something that has been questioned by his arch rival Henry Minter—Claiborne is finally appointed second officer aboard the CSS , a hastily converted side-wheeler, now commissioned as a raider. Following a flurry of successful adventures, the is disabled, and Claiborne is appointed captain of the CSS , a Yankee opium clipper he manages to seize. From the helm of this magnificent ship, Claiborne leads his intrepid crew on a series of high adventures that find their climax in a stunning sea battle. Poyer's determination to present a complex, historically accurate sea yarn is impressive, but his tendency to clutter the narrative with technical detail and terminology will befuddle those without nautical expertise. Sailing enthusiasts will be in their element, however, and diehard Civil War enthusiasts will find that the breadth of scope and breathlessness of pace compensate for the overload of naval detail. The prolific Poyer leaves plenty of loose ends dangling, so more is to be expected of Claiborne and his crew of swashbuckling rebels.