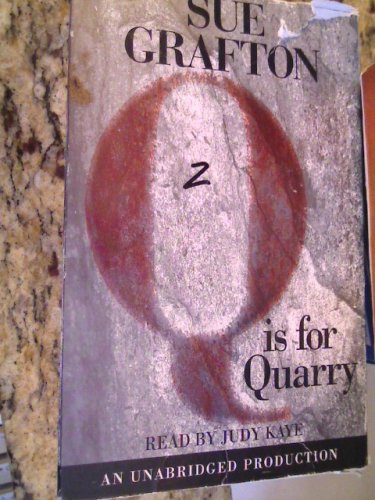 Q IS FOR QUARRY

Although this latest Kinsey Millhone novel features all of Grafton's tried and true elements of suspense and humor, there's something unusual here: the story—of an unsolved homicide that occurred in 1969—is based on a real event. Grafton became interested in this case, of an unidentified white female whose decomposed body was discovered near a California quarry. While Grafton was writing the novel, Jane Doe's body was exhumed and a forensic artist did the facial reconstruction, in the hopes that seeing the victim's image might trigger someone's memory. Kinsey is pulled into working on the case when her old friend Con Dolan asks for her help as a favor, to help Stacey Oliphant, an aging, ailing policeman, fulfill his dream of solving the mystery of Jane Doe's murder. There's not much to go on, as the case has been cold for years, yet the trio—Kinsey, Dolan and Stacey—persevere; slowly, leads begin to turn up. Kaye gives a fine performance. While she's well accustomed to reading Kinsey (she's been the audiobook reader for the entire series) and performs that part with gusto here, she also deftly handles the craggy old voices of Dolan and Stacey (although at times it's hard to distinguish between them). By turns sassy, professional and heartbreaking, her portrayal of Grafton's beloved heroine will delight fans.