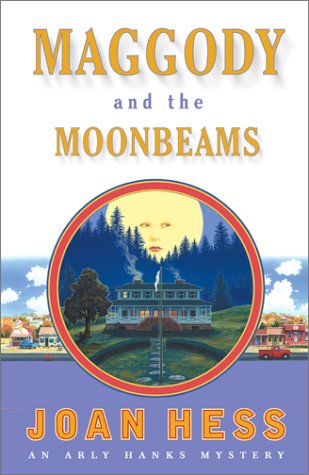 MAGGODY AND THE MOONBEAMS: An Arly Hanks Mystery

The ever-inventive Hess proves that a long-running series doesn't have to be stale in this latest outing for Arly Hanks, chief of police of Maggody, Ark., population 759. Arly is stuck chaperoning the church youth group on a trip to Camp Pearly Gates to help renovate the site. Accompanied by Mrs. Jim Bob, the ever-slimy Brother Verber and the high school shop teacher, Larry Joe Lambertino, Arly thinks her biggest challenge will be keeping the girls and the boys in separate cabins. There's the pesky problem of Duluth Buchanon's missing wife, Norella, but it's not until one of the girls stumbles over a dead body that Arly really starts to worry. The dead woman is one of the "moonbeams," a member of an all-female sect located near the campgrounds. With their white choir robes and shaved heads, they are sometimes mistaken for aliens, and their reluctance to cooperate with the ensuing murder investigation drives Arly nearly to distraction. (The "moonbeams" provide the author a chance to satirize not only cults and the way they prey upon the needy but also the ways in which women are victimized in our culture.) Hess makes effective use of her inimitable mix of Southern satire and smoothly paced plotting as Arly juggles horny teenagers, the ever-officious Mrs. Jim Bob and a prime suspect who keeps breaking out of jail. There may not be too many surprises, but Hess makes sure there are plenty of laughs from first page to last.