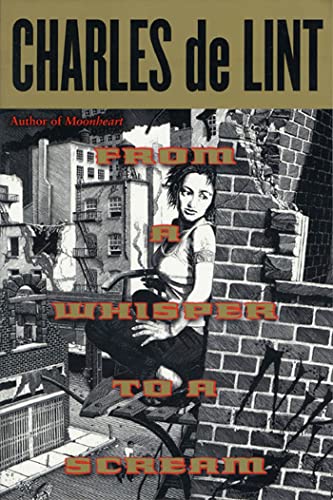 FROM A WHISPER TO A SCREAM

In this reissue of the versatile de Lint's () second "Samuel M. Key" novel, a darker take on his typically upbeat urban fantasies, a serial killer with a supernatural pedigree upsets the peaceful order of the city of Newford. Newspaper photographer Jim McGann stumbles on the first clues to the killer's identity when he spots the same young girl and a graffiti scrawl reading "Niki" in the background of crime scene photos for a succession of murdered teenage hookers. McGann's search for the elusive Niki dovetails with the investigations of homicide detective Thomas Morningstar, who spots unbelievable similarities between the crimes and the handiwork of Teddy Bird, a child killer whom he gunned down two years before. In the course of establishing that Bird's malignant spirit is alive and pursuing the terrified Niki for a reason, de Lint offers the reader some spectacularly horrific moments involving Creole voodoo, Native American mysticism and the strong-arm tactics of an Irish organized crime kingpin. The novel's central idea—that the killer is "the distilled essence of all that was wrong with the city"—is not terribly original, but it gives de Lint a unique angle from which to explore the social ills of the modern city and their impact on a cross-section of well-drawn characters. Fans who missed the book in 1992 will welcome this sidebar to his better known work.