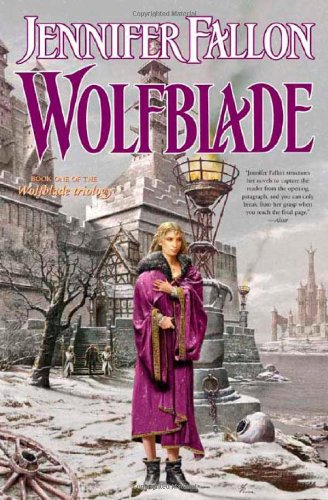 The first book of Fallon's new trilogy showcases the Australian writer's skill at dramatizing the convoluted schemes and backstabbing of king making and power politics. Though not yet 16, Lady Marla Wolfblade, sister to Lernen, the High Prince of Hythria, is a valuable piece in a vast political chess game. Marla's upcoming wedding to King Hablet of Fardohnya will give Lernen access to Hablet's armies, in case of attack from neighboring Medalon; they'll also come in handy to make the Warlords of Hythria toe the line and to withstand attacks from members of the Hythrian "Patriot" faction disgusted by Lernen's hedonistic lifestyle. Fortunately, Marla finds a helpful adviser in the clever dwarf Elezaar, whose former lord was assassinated by Patriots. With his help, Marla grows from a mere pawn to one of the most powerful women in Hythria. Fallon sets the stage for another lively fantasy saga full of intriguing characters, smart dialogue and twisty plotting.