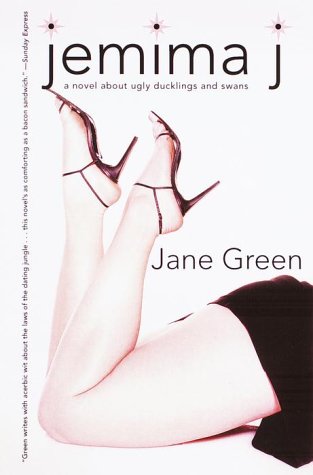 Jemima J: A Novel about Ugly Ducklings and Swans

Yet another take on the singles scene, and from yet another British writer, this jaunty novel has one slightly new focus--the Internet as a dating device. ""Bored, fat and unhappy"" Jemima Jones is a hack writer on a small London paper, whose weight precludes both promotion (which she richly deserves, because she's smart) and getting together with the man of her dreams: kind, modest and gorgeous reporter Ben Williams. The Web opens a new world to Jemima, and when she begins an online correspondence with L.A. gym owner Brad, identifying herself as JJ, her friend Geraldine encourages her to send Brad a doctored photo of what she would look like if she were thin. Jemima joins a gym, goes on a diet and even becomes a blonde, preparing to accept Brad's invitation to come to L.A. Lucky JJ: Brad turns out to be a hunk, and the sex is great... but JJ senses that something is wrong. Meanwhile, Ben has become a celebrity ""presenter"" on British TV, but while the whole country goes gaga over his looks, he too feels that something is missing. By the time several coincidences produce a dreams-come-true ending, readers are fond of plucky Jemima, but somewhat tired out by her adventures. Green's determination to provide texture results in too many scenes that brim with London and L.A. local color, but fail to add verve to the narrative. Outside of Geraldine, who, surprisingly, is both beautiful and a true friend, the other characters tend to be stereotypes: Jemima's roommates, airheads on the make; the predatory female TV producer; the editor who offers Jemima a promotion once she is blonde and svelte. Though the concept is clever and nicely handled, the broad humor lacks true comic brio. (As the online initiated would say: it's not LOL.) Green does, however, capture the nuances and neuroses of the singles scene with a gimlet eye and an uninhibited voice. A bestseller in England, the book should also hook female readers here as they relate to Green's frank comments about body size and social acceptability. (June)
close
Details