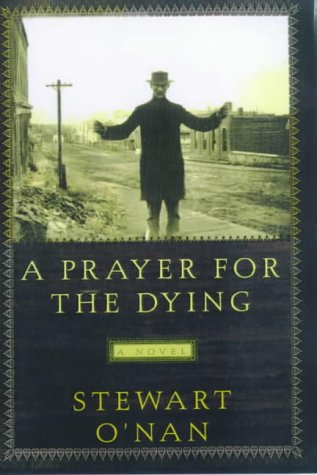 A Prayer for the Dying

If there were any doubt of his protean gifts on the basis of his four previous, singularly different novels (A World Away, etc.), O'Nan again proves himself a writer of dazzling virtuosity and imagination. This eloquent horror tale/philosophical fable is yet another of his narratives in which character and fate intertwine in a situation of moral gravity. Narrator Jacob Hansen (who speaks to himself in the third person: ""You can feel the past oozing up like mud"") is a psychologically scarred Civil War veteran. Shortly after the end of the conflict, he has settled with his wife and baby daughter in the tiny prairie town of Friendship, Wis., which is now in the midst of a spectacularly beautiful summer--and a troubling drought. Jacob has three jobs--as undertaker, constable and minister--and a crushing, somewhat eerie sense of responsibility for all of the citizens of Friendship. His feverish piety and his repeated declarations of faith are gradually revealed as thin coverings over a bottomless well of despair. When three deaths from diphtheria occur in quick succession, Jacob convinces his wife not to leave town with the baby, even as he is passively fatalistic about their slim chances of escaping infection. After both Marta and the baby die, Jacob becomes unhinged; he keeps their bodies in the house, dressing, washing and sleeping with them. Outwardly, however, he doggedly continues to go about his duties, rendered even more frantic as the epidemic escalates, a quarantine is belatedly imposed, and many of the townspeople try to steal away during the night. Meanwhile, a wildfire is moving implacably toward the area, and the serene summertime landscape turns into a version of hell as the sky darkens and the air is heavy with ashes. Even as he commits acts of violence under the duress of duty, Jacob muses that this may be the reckoning described in biblical prophecy: the world cleansed by pestilence and fire. Indeed, Jacob is a version of Job, although he never challenges God but questions his own culpability in failing to keep his world whole and peaceful. O'Nan does a superb job of establishing the faint sense of menace that grows into a horrifying nightmare of random destruction and death. Outside of a few red-herring details, the narrative moves with surefooted technique into the realm of sinister gothic mystery. Profoundly unsettling, it requires a leap of faith from the reader that may, like Jacob's faith, fail at times, but it is a mesmerizing story and a brilliant tour de force. Author tour. (Apr.)
close
Details