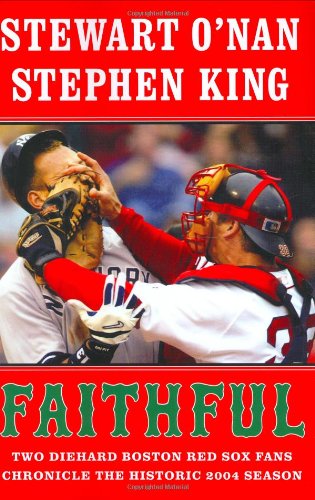 Of all the books that will examine the Boston Red Sox's stunning come-from-behind 2004 ALCS win over the Yankees and subsequent World Series victory, none will have this book's warmth, personality or depth. Beginning with an e-mail exchange in the summer of 2003, novelists King and O'Nan started keeping diaries chronicling the Red Sox's season, from spring training to the Series' final game. Although they attended some games together, the two did most of their conversing in electronic missives about the team's players, the highs and lows of their performance on the field and the hated Yankees ("limousine longballers"). O'Nan acts as a play-by-play announcer, calling the details of every game (sometimes quite tediously), while King provides colorful commentary, making the games come alive by proffering his intense emotional reactions to them. When the Red Sox find themselves three games down during the ALCS, King reflects on the possibilities of a win in game four: "Yet still we are the faithful... we tell ourselves it's just one game at a time. We tell ourselves the impossible can start tonight." After the Sox win the Series, O'Nan delivers a fan's thanks: "You believed in yourselves even more than we did. That's why you're World Champions, and why we'll never forget you or this season. Wherever you go, any of you, you'll always have a home here, in the heart of the Nation." (At times, the authors' language borders on the maudlin.) But King and O'Nan are, admittedly, more eloquent than average baseball fans (or average sportswriters, for that matter), and their book will provide Red Sox readers an opportunity to relive every nail-biting moment of a memorable season.