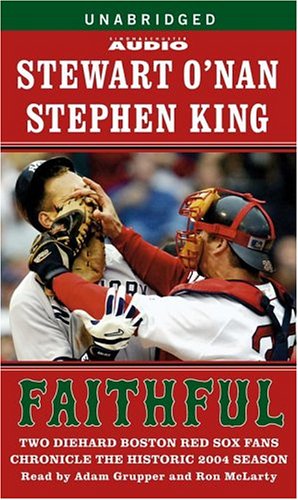 "Why do you suck so much?" O'Nan shouts at his TV. Until the 2004 baseball season, this had been the query of many a Boston Red Sox fan. But 2004 was not only the year in which they broke the "Curse of the Bambino," it was also the one that O'Nan and fellow Sox fan and friend King documented through journals and e-mail. The result is a book-length conversation, perfect for audio format. In the hardcover, King's writing is signified by bold-faced type. The distinction here is made by the use of two narrators. Since McLarty has successfully narrated King's work before ( , etc.), it may seem that choosing him would be a no-brainer, but his tough New York accent and beefy voice don't quite mesh with that of King, who, though a demon at the typewriter, is amiable and soft-spoken in public interviews and television appearances. However, this new hardboiled persona does contrast well with Grupper's rendition of O'Nan, who's given an energetic, crisp, almost naïve-sounding voice. All in all, both readers deliver excellent and enthusiastic performances, and they work well together to convey the excitement of this memorable season.