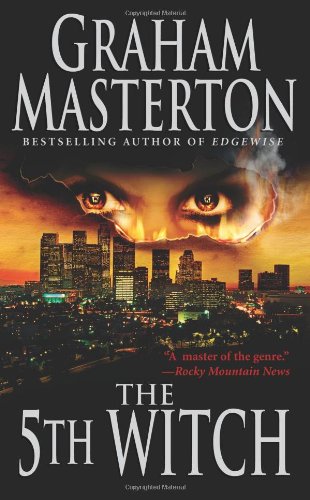 Black magic, mobsters and evil witches hold La La Land hostage, making Masterton's latest batch of chills and chuckles ( ) scarier than a writers' strike. Along with most of the city, Det. Dan Fisher, West Hollywood Homicide Division, is horrified as international crime czars take over law enforcement in a bloody coup with the spooky aid of “the Quintex” of 350-year-old witch Rebecca Greensmith, who's able to be in five places (and bodies) at one time. She's backed up by a Haitian witch, Michelange DuPriz, who works for the zombie Jean-Christophe Artisson; by Miska Vedma, a Russian witch helping “White Ghost” Vasili Krylov; and by others. Haunted by the death of his wife, Gayle, three years earlier, Dan lives next to good witch Annie Conjure, who pitches in. Rebecca's malevolent forces kill some of L.A.'s A-list, and Dan will stop at nothing to save his fair city and put an old ghost to rest. Masterton, a veteran horror author notable for his dark humor and snazzy plotting, pulls off yet another clever thriller.