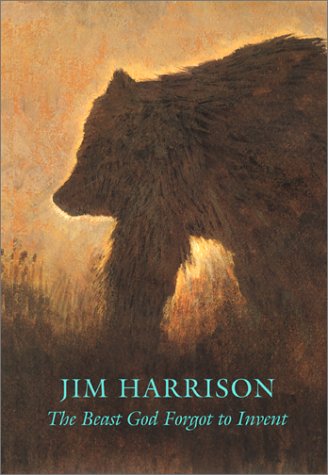 The Beast God Forgot to Invent

Poet, essayist and novelist Harrison (Dalva, etc.) has long been acclaimed for his portrayal of human appetites--sexual, artistic--and his descriptions of Michigan's wilderness. In this collection of three witty novellas, he dissects two high-strung, slightly lecherous intellectuals, men who cannot tear themselves away from their books or work, who drink and gourmandize to blunt the sense of waste that taints their silver years. Harrison treats these characters with empathy but, as always, he contrasts them unfavorably to more instinctual, thus happier, men. The title novella, which begins slowly but is the most affecting of the trio, is narrated by Norman Arnz, a wealthy 67-year-old book dealer who lives in a cabin in northern Michigan. Norman's peaceful retirement is disturbed when his friendship with a virile, brain-damaged man exacerbates the feeling that he has lived his life too timidly. Similarly, the protagonist of ""I Forgot to Go to Spain"" is a 55-year-old pulp biographer who has left behind the romantic ideals of his graduate school days and gone on to earn millions compiling the sort of books that ""fairly litter bookstores, newsstands [and] novelty counters at airports."" When he recognizes that compulsive work habits have deprived him of his dreams, he hopelessly tries to reignite an old flame (only to find she prefers her gardener). Sandwiched between these two novellas comes ""Westward Ho,"" finally starring a man who is content in his own skin: Brown Dog, an easygoing woodsman who has appeared in two of Harrison's previous tales. This time the Native American from Michigan brings ""real emotion"" to Hollywood when he maneuvers his way among movie insiders in order to recover a stolen bear rug. Throughout the volume, Harrison's intricate symbolism and scathing observations of urban foibles, his sly humor and vibrant language remind readers that he is one of our most talented chroniclers of the masculine psyche, intellectual or not. (Oct.)
close
Details