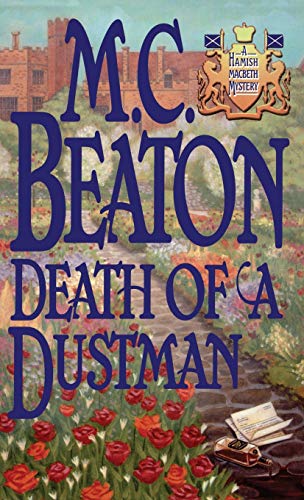 Death of a Dustman

That the prolific Beaton seems to be writing for television in her 16th Hamish Macbeth mystery (after Death of an Addict) may be no surprise, given that the same U.K. company that brought Inspector Morse to the small screen has filmed some novels in this series. After all, what's superficial or formulaic on the page can look just fine on TV. When, in an effort to gain publicity for the local community and herself, bullying Strathbane Council member Freda Fleming gets drunken Lochdubh dustman Fergus Macleod promoted to ""environmental officer,"" Fergus can't believe his luck. Alas, he doesn't have much time to strut his new military-style uniform (""He looked for all the world like the wizened dictator of some totalitarian regime""), because someone bashes the back of his head in and dumps his body in a rubbish bin. Enter policeman Hamish Macbeth, who soon discovers that Fergus had a second career as a blackmailer. As he pursues various suspects and red herrings, Hamish flirts with an old girlfriend, muses on the horrors of wife-beating, and generally carries on in a way that presumes readers are old friends who'll forgive him his every indulgence. A wildly improbable feat of Scottish hammer-throwing brings down the villain, while a second murder that's not what it seems provides some last-minute suspense. If the U.K. television series ever comes to the U.S., that would give sales a big boost. Mystery Guild Featured Alternate. (Mar. 6) FYI: Beaton is the pseudonym of Marion Chesney, known for her Regency romances as well as her Agatha Raisin series.
close
Details