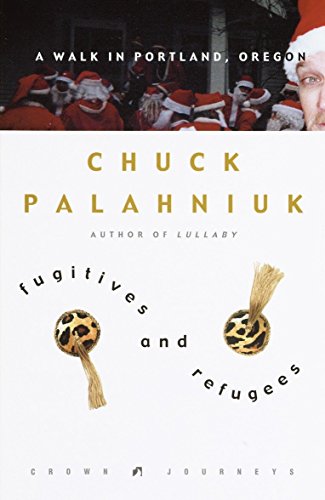 FUGITIVES AND REFUGEES: A Walk in Portland, Oregon

Beginning with the premise that "everyone looking to make a new life migrates west," Palahniuk (; ) portrays Portland as a city that attracts a sort of modern-day pioneering—or at least innovative—spirit. And because it's the cheapest West Coast city in which to live, Portland also draws its share of down-and-outs, making it a bit rough around the edges. Written as much for first-time visitors as for those who already share Palahniuk's passion for the city, this book is a mixture of practical travel guide and personal vignettes featuring quirky acquaintances and moments of happenstance. In keeping with the Crown Journeys series' tone, this is at once a reflection of the writer and of a particular community. Would every other novelist have devoted one of the longer chapters to the city's thriving sex industry and the many places visitors can partake? Palahniuk's fondness for his not-so-sleepy hamlet comes through in each gritty detail (for example, the recommended shopping excursions list includes the best thrift stores, and suggestions for accommodations emphasize haunted hotels). Certain details will tempt as many readers as they'll deter: the semiannual Apocalypse Café, where guests pretend to celebrate "the first potluck after a nuclear holocaust"; the world's largest hairball, on display at Mount Angel Abbey and Seminary; the 1940s self-cleaning house; and historic underground tunnel tours. Among the filth and grime, abundant gardens grow, and Palahniuk hypes them all—from the country's largest forested municipal park to Mill End Park, "the size of a big dinner plate... surrounded by six lanes of heavy traffic." Map.