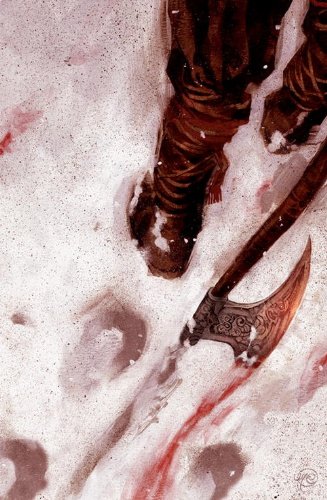 Northlanders, Vol. 3: Blood in the Snow

From examining a shattered future America in , Wood turns to life in an even more disturbing time: the Viking Age. The four pieces gathered here fall between longer story arcs in the monthly comic; together, they form a mosaic showing how children, warriors, women, and families fared when sharp weapons were the sum total of law and order. No one had it easy. Wood isn’t unsympathetic to the Vikings, who started raiding because life in their native land was so brutal. However, he is unsentimental about their own brutality, as they raped and robbed anyone vulnerable and as they turned on themselves in self-destructive violence. The scripts are taut, historically well researched without being pedantic, and the four artists respond to them well. Most striking is “The Viking Art of Single Combat,” in which Lolos’s dynamic style complements Wood’s coolly distant analysis of dueling champions. As a picture of human behavior in extreme conditions, these stories are moving and memorable.