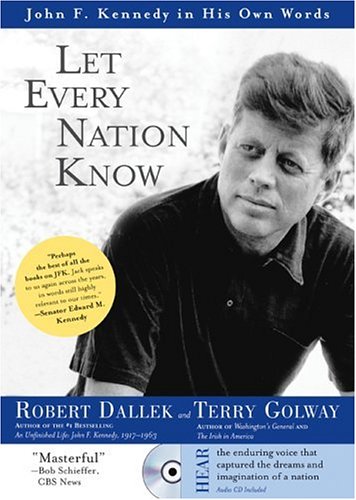 Let Every Nation Know: John F. Kennedy in His Own Words

After Lincoln, John F. Kennedy is generally acknowledged as our most eloquent president. The words of such major speeches as his inaugural and his remarks at the Berlin Wall resonate still in the minds of Americans. But as this book and CD illustrate, Kennedy was equally articulate on a host of other occasions, including campaign debates with Richard Nixon, White House press conferences, commencement addresses and comments on such topics as the integration of the University of Mississippi and the Cuban missile crisis. Of course, a large part of JFK's communicative excellence lay in his smart, confident delivery. Thus bestselling Kennedy biographer Dallek and Golway ( ) present the speeches on a CD featuring Kennedy's own voice, while their book sets each of the CD's 32 tracks in historical context. The speeches and commentary trace JFK's presidential career from the 1960 campaign through his death. Painstakingly, the authors lay out the parameters of real politics that lay behind particular phrases and positions. In the end, the reader/listener is even more impressed with JFK after learning the backgrounds and contexts and then hearing Kennedy so lucidly express the words.