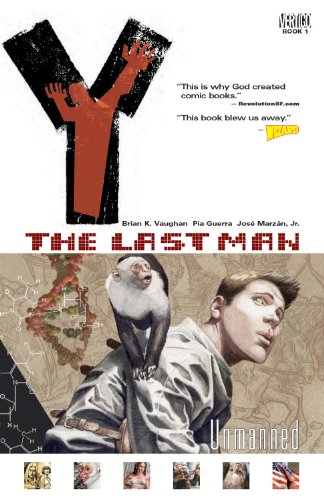 Yorick Brown is an escape artist; has a fabulous girlfriend who's traveling in Australia; and possesses a genetic make-up that's allowed him to survive a plague that killed every male being on the planet except for him and his pet monkey. Yorick is the last man on earth, and in the resulting chaos, he must find a way to help save the human race. At least that's what the (now all-female) government thinks. Yorick would prefer to find his girlfriend, but it's hard to get a flight halfway around the world when almost all the pilots and mechanics are gone. It's hard enough to drive down the block, since the streets are jammed with the cars of men who were behind the wheel when the instantaneous plague hit. Furthermore, the entire social fabric has gone to hell, with gun-wielding wives of Republican representatives insisting on getting their husbands' seats and tribes of latter-day Amazons claiming males were meant to die. Since Yorick's mother is a congresswoman, he's protected by secret spies. And his escape skills come in handy when he's trapped first by a marauding garbage-woman and then by his mother, as she tries to keep him from doing anything stupid. Meanwhile, who are the mysterious Israeli soldiers who seem so gratified by the situation, and why is Yorick's sister so intent on joining the Amazons? With clean lines and muted colors, Guerra and Marzán invoke a frighteningly believable future; their vision of the surprise and horror to come is so beautifully ordinary, it's entirely convincing—and addictive.