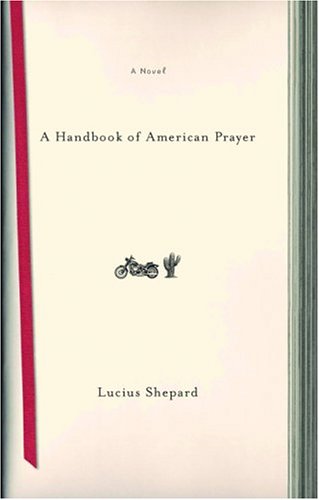 A HANDBOOK OF AMERICAN PRAYER

Having made his reputation with literary SF and fantasy set in the jungles of Central America ( ), Shepard embarked on a second phase in his career, exploring the back roads of America ( ). Mixing the tropes of fantasy and noir fiction, Shepard has cobbled together a beguiling tale. Wardlin Stuart, spinning his wheels as a bartender just off of Puget Sound, gets into a drunken brawl that ends in death for his attacker. Convicted of manslaughter and imprisoned, he concocts something called "prayerstyle" as a way to survive institutional violence. To Wardin's surprise, prayerstyle works; it even brings him the love of his life. Word gets out, and other inmates ask him to create and chant prayers for them. Wardlin puts together a book of prayers, and is published, resulting in parole, unwanted fame and hundreds of pleas from across the country for help. Wondering if the religion he inadvertently created is a blessing or a curse, Wardlin tries to lay low with his lady love in Arizona. But his growing popularity results in a violent encounter with a fundamentalist Christian preacher from Phoenix. And just as he's planning to give up prayerstyle, Wardlin discovers that his fictitious god may be real. This well-paced meditation on the nature of faith and our national obsession with the cult of celebrity finds Shepard at the height of his powers: poetic and pugnacious; metaphysical, yet down and dirty as a back-alley brawl.