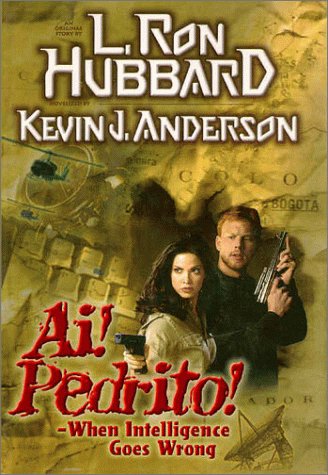 An original story by Hubbard (Battlefield Earth), who's deceased, has been expanded into a novel by Anderson (several X-Files novels), with mixed results. The original story, according to Sherman's foreword, is based on Hubbard's involvement in U.S. intelligence operations, particularly in Latin America. Pedrito Miraflores, a swashbuckling Che Guevara type, is the exact physical double for painfully straight (and excruciatingly bored) U.S. Navy lieutenant Tom Smith. A Russian-Cuban plot leads to their switching places, whereupon they proceed to make love to each other's girlfriends, alternately sabotage and uphold each other's causes, and join forces against the CIA and the FBI. Parts of this book are just as zanily satiric as Hubbard's celebrated lampoon of pulp writing, Typewriter in the Sky, and, as you'd expect from both Hubbard and Anderson, the pacing is brisk and the action plentiful. The central conceit wobbles under the load of a full novel, however, and too often the satire slides into silliness or relies on gender and ethnic stereotypes. Even so, fans of nonstop, slightly goofy SF should enjoy this one. Simultaneous audio; author tour. (June)
close
Details