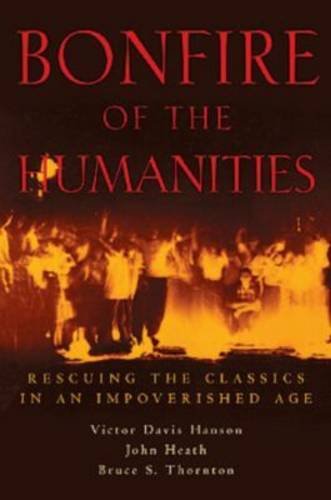 BONFIRE OF THE HUMANITIES: Rescuing the Classics in an Impoverished Age

It has become quite common over the past 20 years for various groups of humanists to cry like prophets in the wilderness over the demise of the classics both in small liberal arts colleges and large state universities. Hanson and Heath (coauthors of and professors of classics at, respectively, Cal State, Fresno, and Santa Clara University), along with Cal State classicist Thornton, contend that these arguments generally fail to strike at the heart of the problem—which is, they say, that contemporary academics are hypocrites who decry racial discrimination, sexism and democratic capitalism from the vantage point of well-paid, tenured positions. These professors—whom they deride as "Savonarolas... ideologues of the multicultural and postmodern Left"—also purportedly contribute to the death of the classics by writing jargon-filled articles and books about ancient Greece and Rome that are inaccessible to a broader audience. In addition, such academics refuse to teach undergraduates, exploiting instead graduate teaching assistants who do not have the wealth of research to share with these younger students. The authors, who define their own enterprise as "academic populism," address this elitism and hypocrisy in a series of scathing essays and book reviews, which, unfortunately, suffer from many of the same problems of which they accuse their opponents (for instance, those they criticize, such as philosopher Martha Nussbaum and classicist Judith Hallett—and thus these critiques themselves—are more likely to be read by scholars than by a general audience). At best, the authors engage in defensive, whining, self-righteous diatribes in an effort to show how misguided their opponents are. At worst, Hanson, Heath and Thornton use this book to vilify those whom they perceive to have wronged them.