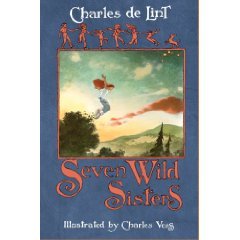 "Course there's spirits in the hills. How could there not be?" muses Aunt Lillian, the backwoods wise woman whose interaction with bee fairies and 'sangmen (tiny ginseng root fairies) sets up the connection the wild red-haired sisters have to the magical Otherworld in this appealing contemporary fairy tale from Canadian de Lint (). It is a wild connection, indeed, because "it's dangerous for humans to be with fairies. It wakes things in you that can't be satisfied, leaving you with a hunger that lasts until the end of your days." These cautionary words come from old Aunt Lillian's true love, the Apple Tree Man, after young Sarah Jane Dillard rescues an injured 'sangman and unwittingly becomes involved in a romantic 'sangman vs. bee fairy conflict, which originated when a bee fairy princess fell in love and ran off with the wounded 'sangman. The middle child of a collection of engaging and sometimes downright incorrigible sisters, Sarah Jane, along with Adie, Laurel and Bess (musical twins), Elsie, Ruth and Grace (the youngest twins), are all drawn into this Otherworldly feud that can be resolved only after much delightful malingering by storyteller de Lint. This long-awaited collaboration between de Lint and noted illustrator Charles Vess, World Fantasy Award–winning artist and past collaborator with Neil Gaiman and Jeff Smith, weaves a gentle and at times humorous enchantment, suitable for fantasy fans of all ages.