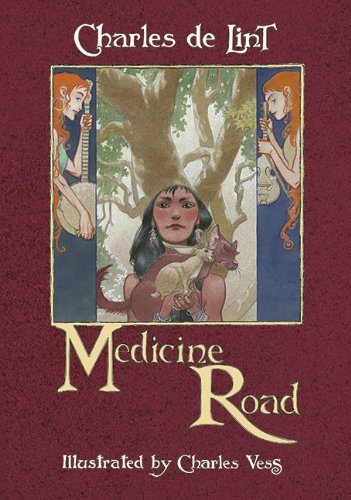 Canadian author De Lint and illustrator Vess make good medicine in this whimsical collaboration of words and images starring those rambunctious red-haired Dillard twins, Laurel and Bess, mentioned in 2002's and now stage center in their own short novel. Musicians Bess and Laurel have exchanged the green Northeast for the desert Southwest for their first road tour, playing their rockabilly music and having fun. Enter two unhappy Native American spirits, Jim Changing Dog and Alice Corn Hair, who've been charged by Coyote Woman to find soul mates in two weeks or lose their ability to shift into their cherished "five-fingered" human form. Soon the two sisters become key players in an unfolding melodrama involving the true love quest. Alice has already found her mate in Thomas, an aging artist, but Jim, a roving red-haired rascal, is uncertain he can ever fall in love until he tumbles for Bess after the twins' Tucson performance. When he begins to woo her, complications threaten to doom poor Jim to life as a red dog. Laurel then decides to awaken her animal self in order to help Bess learn the value of "connecting with the animal spirits inside." The mythic magic inevitable in all of De Lint's best fantasies marks the spirited conclusion.

, A Circle of Cats