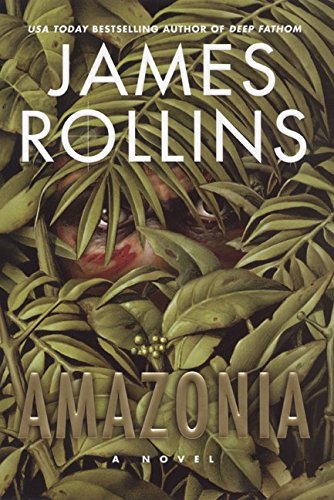 The use of mass market originals as a farm team for hardcovers has lost popularity, but still works occasionally, as with Rollins, whose three mass markets (, and ) displayed a flair for brawny adventure within an exotic locale—a flair put to good use in his hardcover debut. A U.S. Special Forces agent walks out of the Amazon jungle and quickly dies of rampant tumors; what's especially bizarre is that this man has two arms, but when he entered the jungle five years before as part of a biopharmaceutical exploratory expedition, which has been lost track of, he had only one. The rest of the novel follows a group of scientists and U.S. military guardians as they trek deep into the jungle in search of the missing expedition and, hopefully, the secret to the regrown arm—a secret that takes on vast importance when the dead agent's body, shipped to the States, spreads a disease that threatens to wipe out the American population. Meanwhile, a second, predatory expedition, led by a French psychopath, surreptitiously follows the first, aiming to steal whatever cure the searchers uncover; both expeditions wind up at the isolated home of a legendary tribe and the malignant, giant tree that sustains it. Rollins won't win awards for his prose or characters, though both function smoothly in this boldly drawn entertainment, and there's little here that isn't a variation of some classic adventure trope. His pacing is forceful, however, and his atmospherics rich, with giant caimans and jaguars, mutant amphibians and hungry locusts adding to the mayhem, a high body count and a congenial sense of the ridiculous—although Rollins plays it deadpan. This is old-fashioned, rugged adventure in the tradition of Haggard and Crichton, told with energy, excitement and a sense of fun.