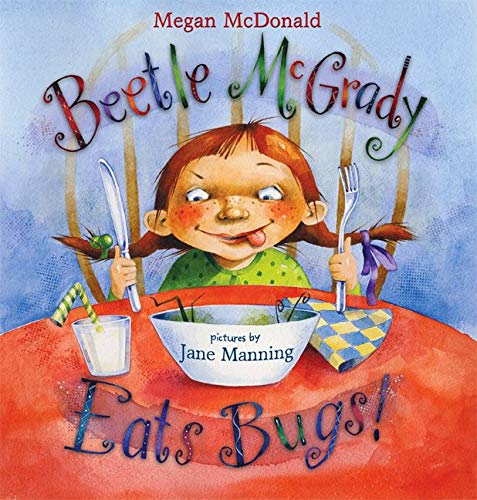 A red-haired second grader who longs to be "a true pioneer" takes center stage in this tongue-in-cheek tale about edible entomological fare. When Beetle McGrady claims she'll "eat an ant in a second," her friends dare her to prove it. So she sets out to chart new culinary territory during "Fun with Food Week" in science class. "Beetle practiced her ant-eating on potato chips. . She practiced on raisins. . But potato chips did not crawl. And raisins did not have legs." When she can't quite muster the courage to stomach a crawly critter, humorous watercolors depict Beetle as a forlorn blue anteater with pigtails. A scattering of purple and blue vignettes convey Beetle's wishes and thoughts, while a cartoon ant fitted out in parka and boots in the corners of several spreads offers its own droll reactions. Manning ( , reviewed above) presents Beetle and her classmates with slightly enlarged heads and missing teeth (the heroine is a kind of Alfred E. Neuman meets Pippi Longstocking). When Beetle at last conquers her fear (with a little help from an avant-garde chef) a final image portrays the smiling girl perched on top of the world, a forked caterpillar in one hand and a plate of insects in the other. Endpapers suggest some lighthearted tips for bug tasting. McDonald's (the Judy Moody series) comical fare is sure to elicit plenty of "eeews" alongside the laughs. Ages 4-up.