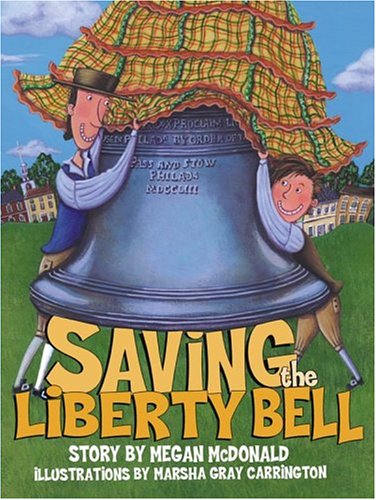 Blending bits of history and long-accepted lore into a snappy story, McDonald ( ; the Judy Moody series) entertains readers with her imagining of the Liberty Bell's whereabouts during the American Revolution. Young John Jacob Mickley is ready to burst with excitement as he regales his younger siblings with a tale of the fateful trip he took to Philadelphia with their father. As Mickley père and fils arrived in the city of brotherly love, warning came of the encroachment of British Redcoats led by General Howe. The rush was on to hide any sources of metal—including all the church bells in town and "the Great Bell" atop the State House (later known as the Liberty Bell). The 11-year-old and his dad, along with their wagon and horses, were pressed into duty, surreptitiously spiriting away the 2,000-plus-pound bell to a hiding place in their hometown of Northampton. McDonald's vivacious text brims with details, while keeping a brisk pace. A historical note fills in additional elements. With a keen eye, Carrington ( ) captures the bucolic countryside as well as prim city townhouses of 18th-century Philadelphia in her acrylic paintings. Her energetic portraits of a fretful John Jacob and his father carting the cleverly (and colorfully) concealed bell let youngsters in on the secret while also keeping them on the edge of their seats. Ages 5-8.