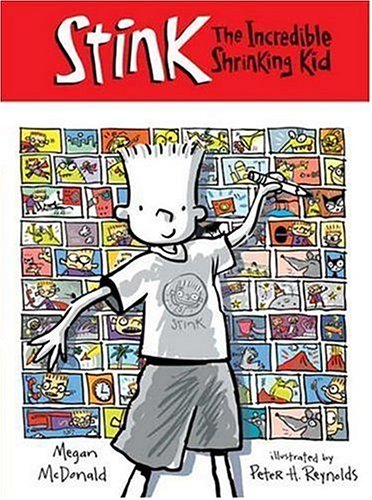 This spirited launch of a new series focuses on Judy Moody's younger brother, Stink. But Judy's fans will be pleased that she plays a pivotal role here. Each day she pulls out a tape measure to learn whether Stink—the shortest kid in his second-grade class at 3' 8"—has finally grown. After one such session reveals that her brother has , Judy suggests he apply gel to make his hair stick up so he'll look taller, which turns his locks bright orange. The lad believes his luck is changing when the teacher draws his name to care for the class pet, a newt, for a weekend. Alas, another of Judy's attempts to help results in calamity: when the two are cleaning the newt's cage, the pet disappears down the kitchen sink Judy accidentally flips the switch for the garbage disposal. Yet the quick-thinking girl assures Stink that the creature likely slipped down the pipes to safety ("Think of it like . He's probably sailing down the river right now on a raft, having a big, fat, newt adventure"). For a President's Day assignment, Stink eschews Washington and Lincoln to write about James Madison, the "shortest president ever" (his family shows their support by throwing the boy a James Madison Day party). "The Adventures of Stink," silly comic strips hand-drawn by the boy and positing him in various superhero roles, add little to the plot but may well attract reluctant readers. McDonald's breezy narrative and likable characters will keep Judy's followers amply amused and recruit new fans. Ages 5-8.