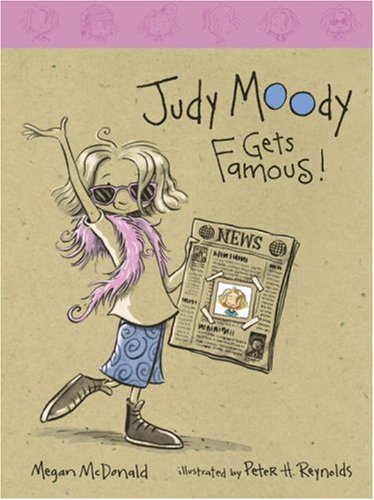 This sequel to handily matches the original in zip and wit, portraying the spunky Judy in her quest for recognition. Famous for her changeable moods, the third-grader wants to become just plain after her arch rival, Jessica, wins a spelling contest to earn the title of Queen Bee, an honor accompanied by a bejeweled tiara and a front-page headline in the local newspaper. In contrast, green-eyed Judy "felt about as famous as a pencil." When it becomes clear that her spelling prowess will not pave Judy's way to fame, the resourceful child tries to pass off a hammered cherry pit as one from George Washington's ill-fated tree—a ruse that bombs when a boy mistakes it for an M&M and swallows it. Judy's cat, Mouse, makes another appearance, helping the heroine attract the spotlight when it wins second place in a pet contest; but the newspaper photo shows only her elbow, and her name appears as "Judy Muddy." McDonald provides an inventive conclusion to her tangy tale, as an altruistic undertaking on Judy's part garners her fame (hint: her medical school aspirations once again come into play)—but anonymously. Even Judy could spell two words that describe both the plot and its heroine: f-r-e-s-h and f-u-n-n-y. Here's to her quick return. Ages 6-10.