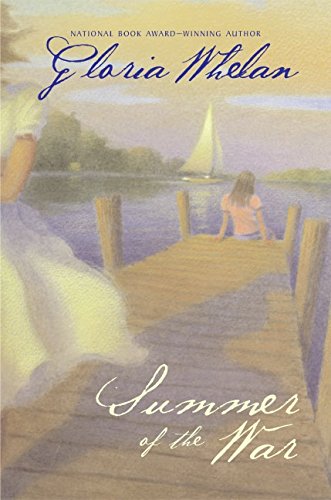 Summer of the War

Fourteen-year-old narrator Mirabelle and her three siblings spend every summer at their grandparents' island cottage off of Michigan's upper peninsula. But 1942's tumult (in the aftermath of Pearl Harbor) takes its toll. Belle's mother has resumed her medical career, and her father takes a seven-day-a-week job supervising production of B24s for the Air Force: neither will be joining the children this summer. Belle's longstanding crush, Ned, talks about enlisting in the Navy when he turns 18 next spring. And Belle's family changes forever when 15-year-old cousin Caroline, her widowed diplomat father dispatched to London, arrives at their cottage, where she's been sent to be out of harm's way. Whelan's ( ) title hints at the book's double entendre, the conflict—both global and personal—that Belle and her family face. Angry and prone to airs fostered by her pampered Parisian childhood, Carrie resists both the earnest efforts of her cousins and the order Grandpa imposes on the family. She schemes to escape the isolation of island life, with near-disastrous results. Belying the emotional drama, Belle's narrative relates the rift that Carrie causes, with an equanimity more nostalgic than of-the-moment. While the family is deeply affected by Carrie—even more so after learning of her father's death—the island's flora and fauna, its storms and calm, mitigate and soothe everyone's distress. Even Carrie, replicating the garden that her mother had detailed in a long-ago summer journal, finds solace and renewal as summer ends. Ages 10-up.