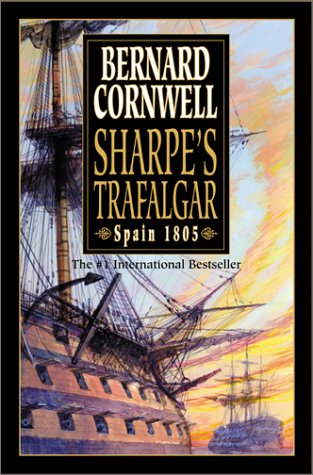 Nobody describes bloody battle scenes better than Cornwell, and even he outdoes himself with this riveting novel about the epic naval battle off Spain's Cape Trafalgar in 1805. This is the 17th volume in his popular Napoleonic War series about Richard Sharpe, a brutish yet admirable soldier in the British army. Here Cornwell jumps back chronologically in Sharpe's glorious career to 1805, when Sharpe is promoted from the ranks for saving Lord Arthur Wellesley's life in India. Loaded down with looted jewels, the bastard son of a London whore heads back to England to a posting with the famous 95th Rifle Regiment. His battlefield promotion to junior officer rank makes common soldiers wary, and gentlemen officers scornful, and Sharpe decidedly uncomfortable in a role he does not yet know how to play. But he certainly knows how to fight. As usual, there is not only plenty of action but romance and intrigue as well. Sailing aboard a large East India Company merchant ship, Sharpe encounters a wealthy married woman whose charms he cannot resist, a pompous English lord he cannot stand and a host of treacherous fellow passengers. Unusual circumstances, betrayal and some bad luck next find him aboard a British ship-of-the-line in pursuit of a French warship in the Atlantic. Beyond the murky horizon lies an unexpected rendezvous at Trafalgar, where Lord Nelson and the British fleet wait to meet the combined French and Spanish fleets. The naval battle occupies the last hundred pages and is stunning for its ferocity, detail, historical accuracy and suspense. Cornwell's fans will love Sharpe at sea in this latest installment in a first-rate series.