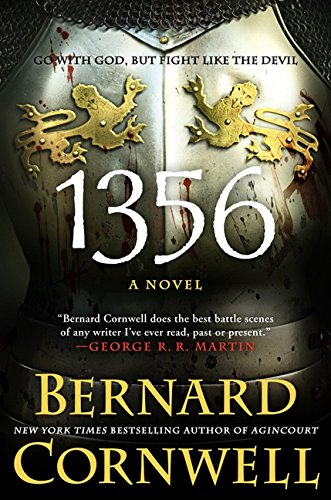 Cornwell, a master of action-packed historical fiction, returns with the fourth book in his Grail Quest series (after Heretic), a vivid, exciting portrayal of medieval warfare as the English and French butcher each other at the Battle of Poitiers in 1356 during the Hundred Years War. Nobody writes battle scenes like Cornwell, accurately conveying the utter savagery of close combat with sword, ax, and mace, and the gruesome aftermath. English archer Sir Thomas of Hookton, called the Bastard by his enemies, leads a band of ruthless mercenaries in France. When the French hear of the existence of the sword of Saint Peter, “another Excalibur,” they must possess it for its legendary mystical powers, but the English have other ideas. Thomas is ordered by his lord, earl of Northampton, to find the sword first and begins, with his men, a perilous journey of raiding and plundering across southern France, fighting brutal warlords, cunning churchmen, with betrayal everywhere, and French and Scottish knights who vow to kill Thomas for reasons that have nothing to do with the sword. With surprising results, Thomas and his men reach the decisive Battle of Poitiers, a vicious melee that killed thousands, unseated a king, and forced a devastating and short peace on a land ravaged by warfare. Agent: Toby Eady Associates, U.K.. (Jan.)
close
Details