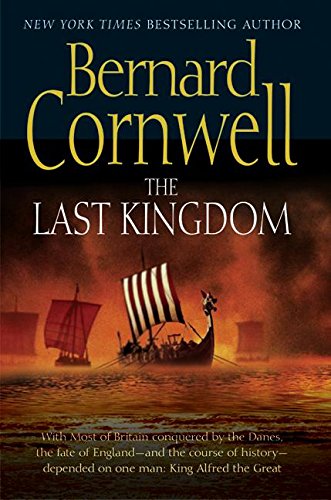 Bestseller Cornwell leaps back a millennium from his Richard Sharpe series to tell of the consolidation of England in the late ninth century and the role played by a young (fictional) warrior-in-training who's at the center of the war between Christian Englishmen and the pagan Danes. (Most of the other principal characters—Ubba, Guthrum, Ivar the Boneless and the like—are real historical figures.) Young Uhtred, who's English, falls under the control of Viking über-warrior Ragnar the Fearless when the Dane wipes out Uhtred's Northumberland family. Cornwell liberally feeds readers history and nuggets of battle data and customs, with Uhtred's first-person wonderment spinning all into a colorful journey of (self-)discovery. In a series of episodes, Ragnar conquers three of England's four kingdoms. The juiciest segment has King Edmund of East Anglia rebuking the Viking pagans and demanding that they convert to Christianity if they intend to remain in England. After Edmund cites the example of St. Sebastian, the Danes oblige him by turning him into a latter-day Sebastian and sending him off to heaven. Uhtred's affection for Ragnar as a surrogate father grows, and he surpasses the conqueror's blood sons in valor. When father and adopted son arrive at the fourth and last kingdom, however, the Danes meet unexpected resistance and Uhtred faces personal and familial challenges, as well as a crisis of national allegiance. This is a solid adventure by a crackling good storyteller.