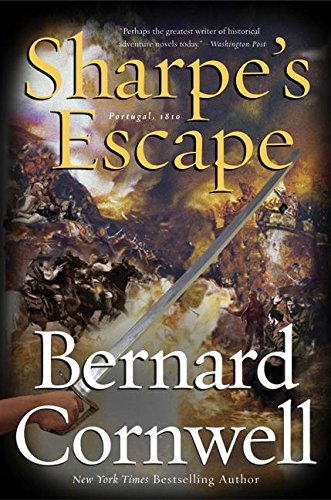 "So Sharpe and Harper will march again." Thus ended , the previous (19th) volume in Cornwell's series, and Sharpe aficionados will rejoice that the prophecy has been fulfilled. In September of 1810, just before repulsing the French army on the bare slopes of Bussaco ridge in central Portugal, Captain Sharpe is forced to take Lieutenant Slingsby, Colonel Lawford's arrogant, heavy-drinking brother-in-law, under his wing. Sharpe then stumbles into a confrontation with Ferragus, the malevolent brother of their treacherous Portuguese ally, Major Ferreira, whom he catches illegally hoarding flour to sell to the enemy. Sharpe is soon ambushed by the cowardly Ferragus and barely escapes with his life. The much abused captain is further humiliated when, despite Slingsby's poor performance at Bussaco, Lawford puts him in charge of the troops, then has the effrontery to reprimand Sharpe for refusing to apologize for insulting the fool. When the French find a way to flank them, the British retreat through Coimbra, where Sharpe and Harper, Sharpe's right-hand man, find themselves lured into a trap. Sharpe's old friend, Portuguese captain Vicente, and a young English governess come to Sharpe's rescue just in time for Sharpe to save his battalion, exacting retribution on his enemies in a resoundingly satisfactory denouement. With fully fleshed-out characters and keen human insight, Cornwell just keeps getting better. His faithful will be left hoping Sharpe goes on forever.