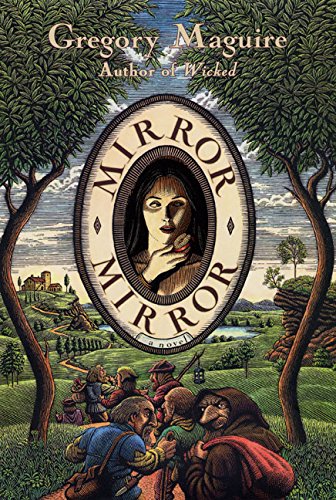 Maguire has a lock on clever, elaborate retellings of fairy tales, turning them inside out and couching them in tongue-in-cheek baroque prose. After his revisionist takes on Oz's Wicked Witch of the West () and Cinderella's ugly stepsisters (), he now tackles Snow White. The notorious Borgia habit of poisoning rivals inspired him to transplant the classic tale to 16th-century Tuscany, where Vicente de Nevada is an expatriate Spanish widower who lives with his daughter, the fair Bianca. Beholden to sinister Cesare Borgia and Cesare's sister (and perhaps lover) Lucrezia, Vicente is sent on what appears to be a fool's errand, to discover and steal from a Middle East monastery a branch of the Tree of Knowledge complete with three apples. When Bianca is 11, Cesare's attraction to her causes the envious Lucrezia to order a young hunter to murder her and deliver her heart in a casket. Bianca, of course, is spared and taken in by seven dwarfs. But this is not Disney; the dwarfs are boulders, stirred to life by Bianca's arrival ("a clothed, bearded obstinacy became slowly apparent"). Several years pass in surreal, dreamlike fashion, with Bianca tending to the dwarfs, who cavort stiffly and philosophize collectively. When Vicente returns successful, Lucrezia poisons an apple for her rival. Innocent Bianca's fate is gentle, but that of the corrupt Lucrezia, in brilliant Venice, is appropriately grotesque. Fairy tales in their original form are often brutal and disturbing; with his rich, idiosyncratic storytelling, Maguire restores the edge to an oft-told tale and imbues it with a strange, unsettling beauty.