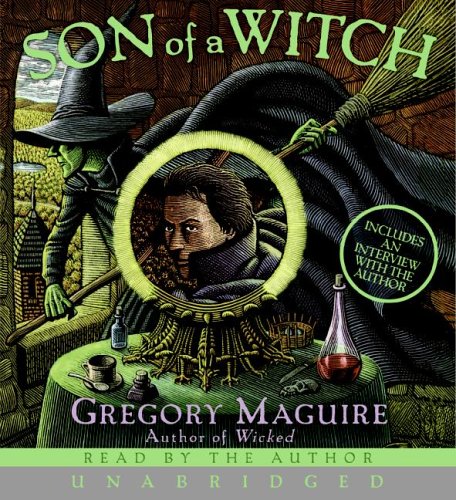 Son of a Witch

With a voice that sounds a bit like Richard Dreyfuss on helium, Maguire does a solid if somewhat unconventional job of narrating his own novel. His pace, like his prose, is deliberate and thoughtful. His creativity and imagination shine in his ability to provide his strange characters (not a human among them) with equally unusual voices. It is not the tonal range that makes his delivery interesting, though; it's the cadence and timbre of the voices that win the listener over. Liir, who may or may not be the son of the Wicked Witch of the West, is read with a detached, depressed air, an adolescent with ennui looking for his lost half-sister, Nor. Candle, the Munchkin girl who becomes his sweetheart, has a voice that sounds almost like backwards masking. A short interview with Maguire is an added value on the final disc; he says he enjoys the recording process and that the inspiration for the book was twofold: the many letters from young fans asking what happened to Nor, last seen as a chained political prisoner, and seeing the Abu Ghraib torture photographs. This one-two punch left an itch that could only be scratched by writing .