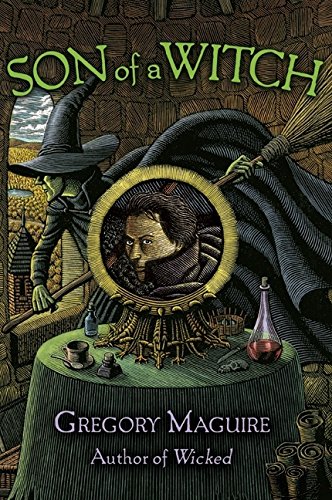 Son of a Witch

The death of Elphaba Thropp, the Wicked Witch of the West, brings about spectacular changes in this masterfully imaginative sequel to Maguire's 1995 blockbuster —most notably, the startling possibility that Elphaba had a son. Scattered among the ruins of great portions of Emerald City, many residents have been skinned and bloodied, supposedly by the barbaric Yunamatas. Travel caravan leader Oatsie Manglehand stumbles upon the body of an unknown young man, badly beaten but still alive. She presents him to the wise Superior Maunt, who recognizes the hurt boy as Liir, rumored to be the dead Witch's secreted son. A mute waif named Candle revives him with her haunting, ethereal music and hidden affections. Meanwhile, Maguire supplies alternating chapters of extensive, mesmerizing backstory of Liir's boyhood, from the witch's watery demise, to the trek to the Wizard's Castle with Dorothy and company, his search for the imprisoned princess Nor, and a long stint in the Munchkinland Army, all while donning his mother's black cape and clutching her magic broom handle. Along the way, a headspinning cast of vividly described, eccentric characters emerges, but nothing prepares Liir for Candle's shocking surprise announcement. Tucked into Maguire's enchanting fable are carefully calibrated object lessons in forgiveness, retribution, love, loss and the art of moving on despite tragic circumstances. Ten years after (which is still on Broadway), fans will once again be clicking their heels with wonderment.