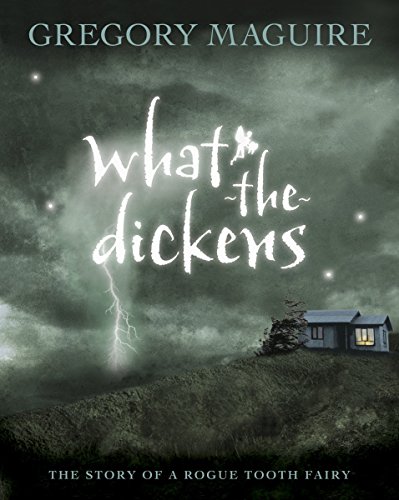 What-the-Dickens: The Story of a Rogue Tooth Fairy

More ambitious than many of Maguire’s ( ; ) previous works, this novel combines the author’s taste for the fairytale backstory with explorations of the values of storytelling. A contemporary narrative frame opens the book with a setting inspired by Hurricane Katrina: after a terrible storm brutalizes the region, the parents in a strict fundamentalist family have wagered outside, leaving their three children with rapidly diminishing supplies in the care of their 21-year-old English-teacher cousin, Gage. To divert them from their hunger and their anxiety, Gage spends an entire night telling them about a “skibberee” (tooth fairy) who grows up on its own and only by chance discovers that the presence of other skibbereen. Dense with allusion, metaphor and pun, Maguire’s prose shines, compensating literary-minded readers for the slow start of the skibberee story. By the time the urgency of the skibberee story matches that of the framing tale, however, Maguire’s agenda emerges in its complexity. Each of the characters takes a different approach to Gage’s story: Dinah, the 10-year-old, needs the magic that Gage’s tale delivers; her older brother claims to need to eschew its fancy, in favor of his parents’ teachings about faith and reason; Gage needs story to exist; and the youngest, who celebrates her second birthday, needs the wish the story promises. Comic scenes, elaborate tableaux and suspenseful sequences will entertain readers who prefer more straightforward fiction, but those readers may be frustrated by the unresolved ending. Ages 10-13.