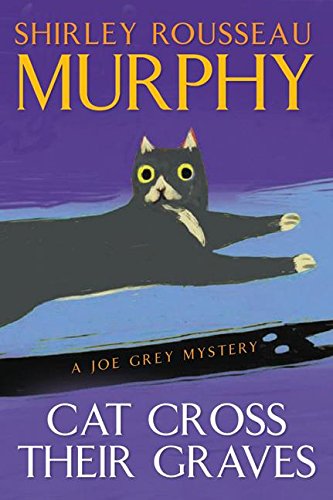 The beginning of Murphy's 10th Joe Grey mystery (after 2004's ) signals that this won't be your typical light cat cozy ("On winter evenings the shadow of a tall, old house struck down across the graves like a long black arrow, and from the canyon below, errant winds sang to the small, dead children"). True, talking tomcat Joe Grey and his comrades, Dulcie and Kit, can squinch their furry paws to punch in 911 or phone in anonymous leads to Molena Point's police captain, Max Harper. These descendants of ancient sentient Celtic cats can also read forensics reports like experts and interact with humans who guard their secret, but this time, such antics take a backseat to the gravity of the murder of local inn owner and retired screen star, Patty Rose, as well as the plight of Lori, a young runaway hiding in a library basement cubby hole, and the discovery of a child predator lurking in the California coastal town. A skilled YA author, Murphy handles such sensitive issues as child endangerment and death well. The large cast of characters may confuse new readers, but established fans will welcome back all their old friends, both feline and human.