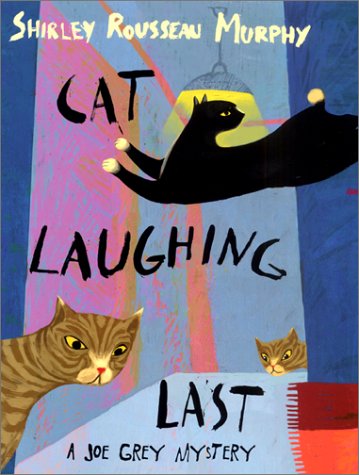 Joe Grey, remarkable tomcat and sleuth last seen in 2001's , returns in Murphy's seventh cute feline mystery of theft, intrigue and murder. When famous novelist Elliott Traynor and his wife, Vivi, 40 years his junior, move to Molena Point to oversee the production of Traynor's play at the local theater, strange happenings begin to plague the usually quiet California coastal town. First, dog-owner Susan Brittain's house is vandalized, prompting Joe, aided by furry comrades Dulcie and Kit, to embark on an investigation that will take them from the houses and shops, over the roofs of the town and into a murder scene. True to form, the cats supply the information necessary for the police to solve the crimes. Meanwhile, a multitude of subplots involving the human residents of Molena Point muddle the mystery. The Senior Survival Club (Mavity, Cora, Lee, Gabrielle and Susan) are concerned with their plan to buy a communal house for their old age; Clyde is still perplexed over his ex-girlfriend, Ryan; and Max Harper and Charlie are trying to work out their relationship. Poetic descriptions and miraculous cats who not only talk, make telephone calls, advise humans but also love to read good books and are as comfortable eating rats as they are caviar make this more fantasy than mystery. While constant references to past crimes and events will inform new readers, committed fans may be disappointed in what fails to meet the standards of prior outings.