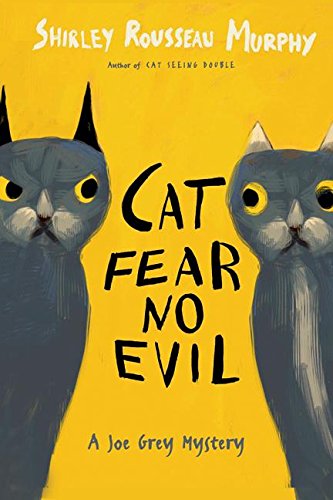 Once again sleek feline sleuth Joe Grey and his tabby partner, Dulcie, prove to be the best snitches the Molena Point, Calif., police ever had in this superior cat cozy, the ninth entry in Murphy's popular series (after 2003's ). A sophisticated thief has been targeting the small coastal town, stealing prize jewelry and paintings, despite elaborate security measures. Also missing is a vintage 1927 Packard belonging to Joe's owner, Clyde Damen. The ante is raised when a waiter at an art gallery opening suddenly falls dead and a local realtor gets blown up in a gas explosion. Meanwhile, someone is stalking interior designer Kate Osborne, whose apartment is invaded by ferocious tomcat Azrael, an old adversary of Joe's, and the avaricious Consuela Benton is leading astray troubled teenager Dillon Thurwell, whose mother is having an affair with a suave art collector. As usual, the relationships between the lively human characters and the talking cats in whom they confide their problems provide as much interest as the crime solving. The intricate and absorbing plot keeps the reader in suspense throughout.