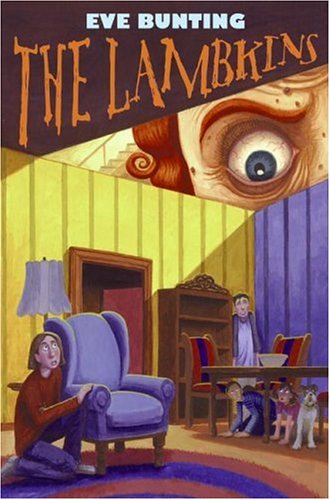 It was eight-thirty on a warm California night when the woman kidnapped me," opens Bunting's ( ) quirky novel centering on four youngsters who have been abducted by Mrs. Shepherd. Kyle, the 14-year-old narrator, encounters the middle-aged woman on a dark street, where he stops to help her with an alleged flat tire. As he reaches into the trunk of her car, he feels the sting of a needle, after which he awakens in a dollhouse. There he meets the other "little Lambkins" (the name she gives her captives)—teenagers Mac and Tanya, and four-year-old Lulu. Gradually Kyle learns what is going on: the woman was so lonely after the death of her genetic scientist husband, who built the dollhouse for her beloved dolls, that she decided she needed "living dolls." She keeps the kidnapped children doll-size by giving them regular injections and attempts to appease them by nurturing their talents (e.g., she provides artistic Kyle with painting supplies, which he refuses to use, and grooms Lulu "to be Shirley Temple"). Though the psychological ramifications of the kids' predicament are compelling, the plot is rather repetitious and lacks action until Kyle begins to make and execute an escape plan. Yet Bunting keeps readers guessing until the finale. Ages 10-up.