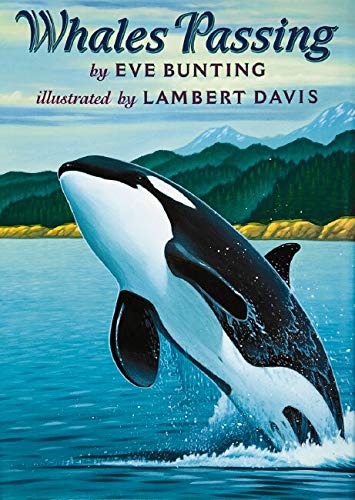 As striking as orcas themselves, Davis's () paintings of gamboling whales help keep this uneven tale afloat. From a cliff, a father and son watch a pod of whales at play. The boy narrates, a key source of the story's inauthentic feel. Bunting's (, reviewed above) sharply honed observations are as exquisite as they are jarring, given the speaker's youth: "I watch the drifts that are their breaths.../ ...and then they dive,/ deep, deep among the streams of fish/ and star-dance light/ that fills their sea." The loosely rhymed text meanders through observations about the orcas, plus a fantasy of their thoughts about humans ("They lack our blubber, sad to say./ But humans have no love of fat./ Imagine that!"), which, from the boy's perspective, sends the giant mammals into gales of "whale laughter." Helpfully, the black-and-white beauties, showcased against clear, aqua tones, glow with Davis's almost reverential touch. Realistic and sharp-edged as a photograph, his illustrations rise to the text's imagery with steamy breaths reminiscent of a snow drift, and a gracefully composed "kite-tail string" of pelicans, yet his artwork conveys a deep respect; he never endows them with anthropomorphized traits. Bunting concludes the story with a densely packed page of orca facts—a thoughtful offering to ardent whale lovers willing to overlook a few vexing passages. Ages 4-up.